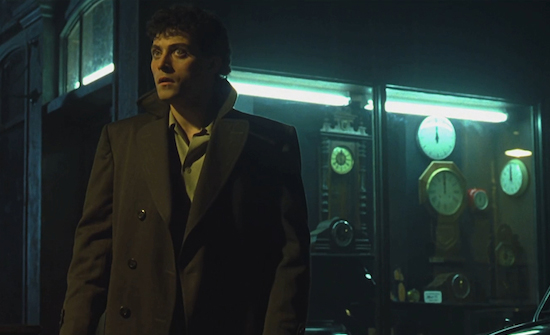 [ADAM WAKES UP #1] a sandbox mindfuck

Adam Wakes Up is the first adventure I ran for my party to throw them into the Rave New World. In the next few post I want to collect design and play-test notes, now that’s still hot in my mind after an 8-sessions romp with my players. .

“Adam Wakes up” is an investigational mind-fuck alas Philip Dick’s Time Out of Joint most commonly known as the Truman’s show.

Kenneth Hite does an excellent job in Bookhounds of London for ToC: He leave the choice to season your London campaign with different sources: Sordid, Technicolour and Arabesque.

The difference between a Tech-Noir Sandytown and a Twin Sandy Peaks is mostly window-dressing,

Tech Noir Sandy is a smoky metropolis surrounded by an anonymous suburbia and a forlorn industrial area, think of Alex Proyas’ Dark City: vendor machines, hats and lipstick, The city centre is a deadalus of Brutalist social housing estates, the Apollo building is a pyramidal menace, Industrial area is red bricks, grime, hydraulic presses, ghastly rave parties. Suburbs are white and ordered and mostly empty, except at rush hours. Go for a white-fenched Blue Velvet Lynch style or a cold war era Los Alamos set up.

The mood is paranoia and conspiracy, you will need bookkeeping of clues and main NPCs. Always give clues and information away generously. Let them connect the dots while they slowly unravel the web of lies and madness in which Sandy Town is embedded.

If you go for the John Woo action flick, the investigation fades in the background: spoon feed clues to your players and give clear choices about the open options, recapping discovered areas, known NPCs and Clues. If they’re not able to keep a tab with the clues, help them out.The clues are choices to follow, they “activate” areas. You go from action to action: from following the killer to infiltrate Channel 88 studios to a debauched night at the Slum Bar to a cross town car race against the Twin Police Team, to burn down the cultivation.

In the campaign I ran for my players, Sandyville was something inbetween Flashdance, Twin Peaks and Dark City, I shaped the police station and the outer city upon Twin Peaks‘ aesthetic of coffee, donuts and wood. The Inner City was a stereotypical American down-town of the 80s with Yuppies, skyscrapers, wrong cops (my players) and bad punks. I drew heavily from “The Choirboys”, a 1977 film by Robert Aldrich, Its wiki entry is quite spot on:

Los Angeles police officers experiencing various pressures at work unwind at night with drunken get-togethers (a.k.a. “choir practice”) at MacArthur Park, where their pranks often go too far: among those there are a retiring cop, a small number of young cops, a bigoted one and a Vietnam vet with panic disorder.