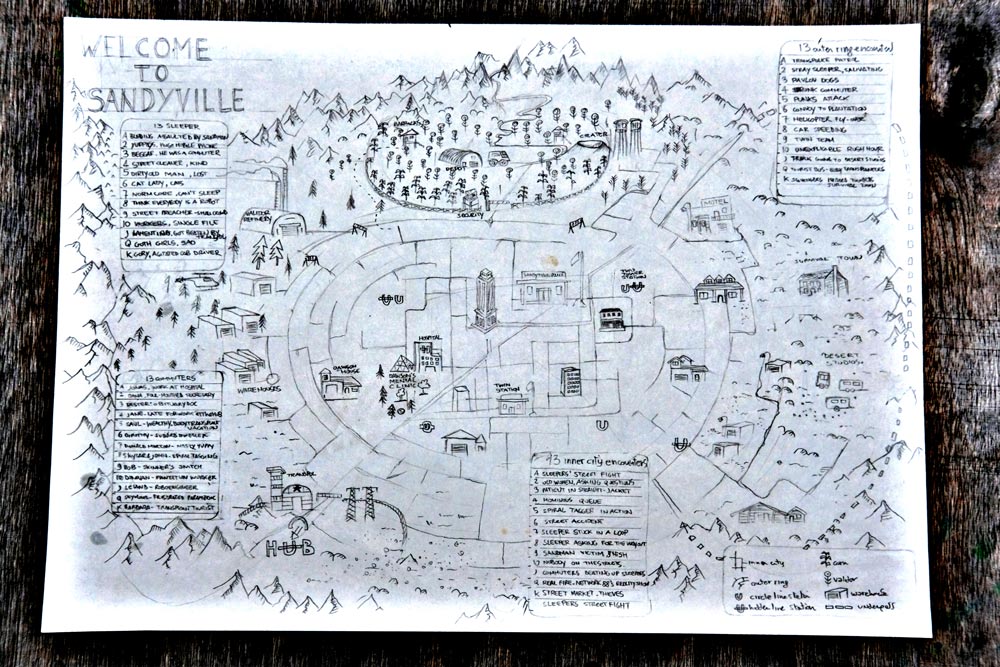 Sandy is not a large city but it’s rather deep. Secrets are everywhere.

Number of total dwellers is irrelevant. Make it crowded or spectral according to needs. Diversify areas. No need to give exact numbers,

it’s all smoke and mirror, a stereotypical mock town which hide its nature of social experiment and “rehabilitation centre”.

It hosts the two “rehab” police stations, the Apollo building, the Slam Bar.

Most of the Sleepers live in apartments of the Inner City.

Dress it according to the flavour of your campaign. Rancho Rosa? Gummo? I went for Los Alamos during WWII during the Manhattan Project.

Whatever it looks like, the Suburbia is a middle class residential area, its driveways are spectral and almost desert at days, it’s littered by vendor machines in place of supermarkets.

The Hospital and Dr Skinner’s clinic are here, as well as the entrances to the hidden tube-track underground.

The House of both Moldway and Skinner, as well as any PNG which work for the Citadel or the Exurbia.

A ring encircles Suburbia, on the outer side: The Industrial area.

On the North Side lies the Plantation. On the East side lies Argleton, the prop-town used by Channel 88 as a film set [right now they’re filming the TV series Robowar, where huge remote-controlled robots fight each other]

The Heart-break motel lies next to a gas station at North-West, from there the crater can be seen, as well as the water towers of the city.

The HUB lies at the South edge of town, it’s an underground spacious and modern train station which connect Sandytown to Alexia, the nearest Citadel. The hub is immense and very well controlled by both Transport Police and plain-clothes police. If the characters are well known in the city, they won’t be able to go through the security, unless they impersonate somebody else or social engineer their way into the station (being on Zero to Hero classifies them as popular). The station has both freight trains and passengers trains, most consumer goods and the food itself come from Alexia.

Next to the there are the Electrical substation with its high-voltage transformers. The cables run underground from the Citadel of Alexia which produce the energy, If the players want to create a black-out, this is their place.

THE SECRETS OF SANDYTOWN

The Inner City is basically a prop-town where the illusion of 80s era is mantained. It is inhabited by all of the Sleepers who have been brainwashed, their former self erased.

Those who have managerial work in city structures (Hospital, Apollo building etc.) and the Commuteers of the nearby Alexia live in Suburbia.

In my game the Players wake up after a terrible hangover which muddled their memories. They are on their way to work to the Police Station.

[ADAM WAKES UP #1] a sandbox mindfuck