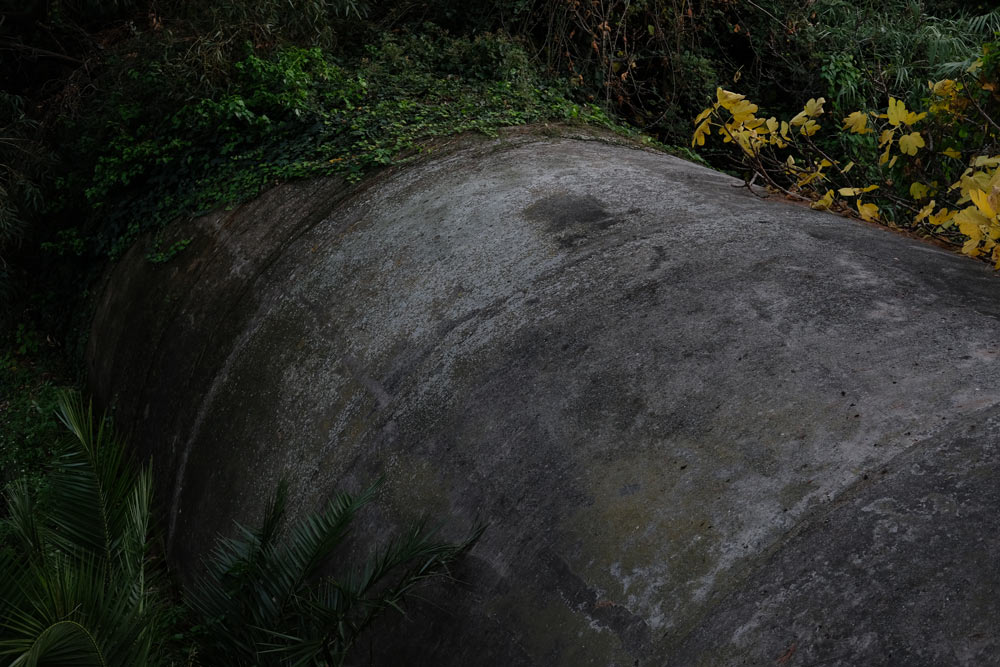 An abandoned railway tunnel stands between the sea-side settlements “Field Hospital” and The City of Flowers.

From the outside it’s made of concrete and it’s mostly covered by vegetation.

The gallery is the quickest and perhaps most dangerous connection between the two coast town of “Small Hospital” and The City of Flowers. The safest detour takes a whole day walk through an impractical yet boring mountain trail. Doing so, the Players will lose all of the fun. A vision potentially enticing: the Sanitarium (or train station, according to what you want them to encounter first), bustling with the life of Romulan tribe, friendly people indeed, the bar is open and tonight there’s a party. Next to the village, the entrance to a sacred tunnel. Warm summer evening. next to the entrance of the tunnel.

The train gallery is sacred to the Rumulan tribe, composed by anarcho-primitivists, neo-pagans and skull trephinators. They keep the tunnel secure and unscathed. The tribe is split in two, there are two settlements on both ends of the tunnel: an old train station on one side, “Station” and a walled ex-sanatorium “Sanatorium”. Both sides have access to beaches. Rumulans are granted access to the tunnel only during initiation rites or for oracle readings of the uttermost importance. Only mechanical technology works in the settlements. The two sides of the settlement trade and communicate with each other in analogue fashion through pigeon post and “relayers”, path-runners who run know their way out of the thorny hill maze. Following a path through the hills always takes a different amount of time, sometimes days sometimes minutes. Few paths are safe and only the Rumulan seem able to follow them: the hill rearrange paths in order to defend itself from intruders. Last week short-cut is now leading to a dead-end of thorns or the edge of a cliff which wasn’t there. The tasty “Pink fruit” grows on secret hill paths, it’s said to cure illness and to reduce entropy when eaten. Many unauthorised gatherers from neighbouring settlements disappeared while sneaking through the sacred hill in search of the Pink fruit.

At the PARTY they: create floating sculptures of tangled wood and iron, throw them into the sea, burn them. Drink a lot of Thorny Milk, a slightly psychotropic mixture of cactus water and fermented apples. Characters who want to join the party will be asked to drink it. WHoever refuse to drink will be seen as an outsider. Only characters with the “Straight-edge” thought can avoid to drink it and have their reputation unscathed.

Everybody gets drunk on the intoxicant cactus milk. Characters who want to join the party are required to drink it, except if you have any lines and veils about alcohol / drugs consumption. There is music on the beach, both live and diffused by a primitive yet powerful sound system.

The two parts of the tribe on a different side of the gallery can see each other through pyrotechnics.

RUMOURS: 1 There’s something in the gallery which can grant you a wish. 2 Only trained “Relayers” don’t get lost on the pathways across the hill. 3 a plane crashed on the hill long ago, nobody has ever found it. 4 The tunnel bring to another dimension 5 those who leave the tracks never come back. 6 the tunnel is alive and speak to the Ones.

Partying Romulans will be happy to show the entrance to the tunnel. The soldier in charge of guarding the gate is half-drunk, staring at the walls of the tunnel. Romulans never go deep inside. They are protective of their tunnel but eager to show it to a friendly party.

You can decide to spend your night at the Waterside, the Gallery Entrance, the pathways. Draw a Resistance Saving Throw to check how badly you’re intoxicated by the Milk of Thorns.

1 GONE FISHING with a handful of Rumulans. If you’re intoxicated you are naked. Armed with an harpoon you have found a giant octopus. Your pals are excited and say it’s delicious. It think the same of you.

2 THE BOAT IS ON FIRE One of your drinking pal decided to get on a boat on fire to show his manliness. He really looked sure about what he was doing unless he started screaming. He’s stuck and the boat is on fire. [2 Mechanical repair tests at disadvantage to rescue him. With two failures you are stuck too. 1C10 Damage each round until you manage to pass the test.]

3 SEX ON THE BEACH A Rumulan from A same sex B opposite sex has shown interest in you. S/he want to leave town, knows a safe way through the pathways. If you are Intoxicated, make a Resistance check: on a failure you make a fool of yourself, managed to offend the whole tribe, got sick and spend the rest of the night vomiting yourself. The whole tribe won’t be friendly with you anymore. On a success and depending how things play out, the Rumulan might follow the party.

4 POTLATCH Burn your stuff on one of the boats to get lucky! For every item or weapon you burn you gain a 10% chance of getting lucky: Advantage on ANY test for the current and next session. (don’t tell the player what’s the reward, just let them roll the % saying something good might happen)

1 SITTING AND DRINKING You spend the evening talking with the guards of the tunnel. They’re half-drunk and fell asleep. One of them went inside, he’s staring at the walls of the tunnel.

2 THE VOICE A voice is calling your name. The Rumulans are incredulous, You are allowed to enter the tunnel, if you dare …

3 A SHADOW come out of the tunnel. It looks like someone from your childhood. You’re the only one who can see it. if you’re INTOXICATED it’s friendly and can telepathically answer to your questions, otherwise tries to snatch you in its cave. SHADOW [Threat:5, 30 HP, 2 attacks: 1C4, can’t be hit by non-sacred weapons. When it hits with both attack, it ENGULF in shadows and will automatically hit on next round. A player ENGULFED in shadows can escape with a successful WILL check. On a successful attack it sucks the colour out of the skin. It won’t get into water.

4 AURORA The tunnel lights up in a kaleidoscope of light. You and everybody present have a vision of the future. Ask one question.

1 You are invited to go with a relayer to the other side of the hill to exchange presents with the rest of the tribe. Unfortunately, the relayer is not very reliable and you get lost. BUT you find the crashed airplane! It would take some mechanical work but it might fly again. The radio seems to be working (no other electronics work around the gallery). If only you had a runway long enough to make it fly again .. (Commissioner tip: The tunnel will do)

2 Against all advice, you went for a night walk on the hill. Good news is you found a huge colony of Thorny cactus. Bad news is that they seem to have closed all ways around you. (drink more of the Milk directly from the cactus to be freed or get away with 3C4 Damage and the look of a hedgehog.

3 Against all advice, you went for a night walk on the hill. You are lost. If the character start shouting or set something on fire, a Romolan relayer will arrive to the rescue. She disappeared years ago.

4 You are on the other side of the hill, the settlement is desert, abandoned perhaps centuries ago. A second moon is raising from the horizon. Venture into this Dying Earth or take the tunnel and try to get back.

From the inside, the tunnel is well maintained and empty except for the rail-tracks. There is some old train wares left to rust. In case of emergency the tribe members are allowed to run through the tunnel to the settlement on the other side, without ever stopping and without leaving the train tracks.

Voices speak from the walls in many languages.

Time and space inside the tunnel change accordingly to the movement of the visitor. The tunnel look different when you run or walk through it. While running, a kaleidoscope of shapes and colours will appear on the walls and the gallery shrink in size.

When walking outside the train tracks, the bricks on the walls slowly rearrange themselves into animal shapes, mouths and humanoid figures that either taunt or tempt the visitor.

When passers-byes slow down (searching for secret doors or observing the shapes count as slowing down) or leave the train tracks, shapes start appearing. From within the train tracks, indistinct shapes can be seen.

1 a mouth speaking gibberish, oozing Gorb. Words can be understood after drinking her Gorb. The mouth will push the characters into doing stupid things for her own amusement.

2 a dinosaur. Will become hostile if attacked or provoked. He does not know much but he’ adorable.

3 a man with a blackened face. He know things.

4 walls go soft and a dark bi-dimensional passage to the inner sanctum appear. Only characters who became part of the mosaic can enter. A wish can be granted, at the greatest price for the petitioner.

The space stretches when the creatures inside are moving slowly: the tunnel become smaller but longer, secret side rooms open up, the brick abstract mosaics come to life. The walls start leaking a heavy fluid which is said to give a new consciousness and inspire visions. Ingesting the fluid make it possibleto communicate with the mosaic creatures. They can show the way to the Interzone, grant a wish or annihilate the petitioner. When removed from the tunnel, the fluid solidify in crystals which soon become opaque, they are carefully sculpted into sacred geometrical sculptures by the Romulans. In the dark the sculptures shine of unknown colours. Gorb sculptures have the same effect of an EMP grenade when they break.

The Tunnel is surrounded by a strong electro-magnetic field: Electronics are temporary disabled while inside, communication to the outside is disrupted, cyber limbs are dead weight, robots become door stops.

Whoever drink or taste Gorb inside the tunnel (1C4):

1 can talk with the mosaic creatures.

2 can talk with the mosaic creatures. They stop understanding people who did not drink.

Electronics won’t work anywhere near the character for 1C4 hours.

Every sip adds 1C4 entropy. When reaching the Entropy threshold inside the tunnel, the character become a mosaic spectre unable to leave.